The Mercury Fountain by Eliza Factor (A Review by Lynne Weiss) 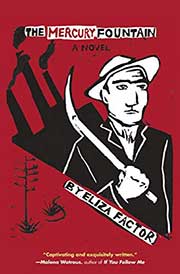 The Mercury Fountain is Eliza Factor’s first novel, so I did not know her writing or reputation, but her book caught my eye because of the publisher, Akashic Press. Akashic is what you might call a “big” small press with a catalog of about 250 titles built up over the sixteen years they have been in business. With the tagline “reverse-gentrification of the literary world,” Brooklyn-based Akashic has carved out an interesting niche for itself with its dedication to “publishing urban literary fiction and political nonfiction.” Founded by Johnny Temple, a former bassist of Girls Against Boys, Akashic has had great success with among other things, its city-based Noir anthologies. The first in the series was Brooklyn Noir, but the series has expanded to include nearly every major and not-so-major American city and many international cities, with titles such as Baghdad Noir and Lagos Noir forthcoming.

There is nothing particularly noir about Factor’s novel (and Akashic also has an extensive list of literary fiction and political nonfiction), but the second aspect of the book that appealed to me was the setting: a utopian community on the Texas-Mexico border in the early 1900s. I can’t say that I love reading books about this time and place (I don’t believe I’ve ever heard of another novel with this setting) but I’m interested in the time period, so I took it on. From the first sentence- The scream must have come from Casa Grande– I was trapped like a miner in a tunnel. In fact, from that first sentence we move quickly to a terrifying (for this claustrophobe) several pages of journeying into the netherworld with Ysidro, a 12-year-old boy who understandably develops his own fear of the mines as a result of his journey, and thus finds pursuing his expected occupation- mining- impossible to pursue.

Pristina is no typical mining town. It was founded by Owen Scraperton, a Massachusetts idealist, on the principles of  “clarity, unity, and purpose.” In practice, this means a community based on rationality and racial harmony rather than religion and ritual. And yet much of what drives Scraperton is his aesthetic fascination with mercury. Although mercury, or quick silver, had considerable industrial value in 1900 (it was used to extract gold and silver from ore), Owen’s fascination with this substance is also aesthetic. He places a mercury fountain in the center of Pristina so that residents can enjoy the fascination of this substance, which exists between liquid and solid forms.

The fountain was not efficient or didactic or scientific- it was beautiful. Owen had some sort of excuse that beauty acted as the engine of evolution and therefore ought to be studied and generated in order to spur the race along. But forget about that. It was lovely in itself, the way the mercury flowed over the rim, its mobile, mirror effect.

Unfortunately, the toxic qualities of mercury were little understood at this time, and Ysidro is not the only character trapped by the mines. Owen invests everything he has in Pristina, where he falls in love with Dolores, a vibrant, independent, and aristocratic young Mexican woman.

Owen had first seen Dolores on Generalissimo, skimming across the Coahuilan plain, nothing like the side-saddled women he’d grown up with. It was incredible to him, finding her. Religion had warped every woman he had met to one extreme or another. And there in Mexico, with the whole country under the pall of dictators and priests, Dolores rode on her horse, free as the day she was born.

Owen is drawn to Dolores for her passionate nature and her willingness to defy convention, but just as he rationalizes his fascination with mercury because it is useful, he believes that he can base his relationship with Dolores on rational principles. It is only much later that Dolores understands that Owen’s attitude toward marriage is at odds with her own:

He didn’t want a woman at all; he wanted an enterprise-sharer. Shopkeepers, he said, had the best marriages because they were immersed in the same enterprise. Did she look like shopkeeper? Is that what he had seen?

One of the strengths of Factor’s book is her ability to portray Owen’s fascination with Dolores, as well as the community’s love of Dolores over time. Owen, it seems, is great on the vision thing, but when people need help or support or sympathy, his devotion to rationalism fails them. Factor also brings to life Owen and Delores’s shared love for their daughter Victoria, who tries to bring her father’s rational idealism and her mother’s earthy passion together.

I admired this novel’s portrayal of a long but not always happy marriage. Dolores’s dissatisfaction is very real, as are her reasons for continuing with Owen. But what I admired the most was the structure of the novel. The story covers a span of twenty-three years, but like Mercury or mercury, it coalesces and moves through time, carrying us to each pool of crisis, tension, and change and providing with quick strokes– all the background we need to understand where we are in the story and what has happened in the intervening years, portraying a world that is fascinating and yet doomed.

This entry was posted in Reviews and tagged Akashic Press, Eliza Factor, Lynne Weiss, The Mercury Fountain. Bookmark the permalink.

This site uses Akismet to reduce spam. Learn how your comment data is processed.